Got some posts in mind, but they always take longer to think about and do then I imagine. In the meantime here's an odd shot. It's not a New York taxi, it's not a taxi at all. But I don't think there's a law against making your car look like a taxi as long as it doesn't have any taxi equipment like a meter and a light on the roof. I guess this guy likes taxis so much he kept the top on the roof.- Many people buy used taxis in New York, but no one I've seen so far has kept that top on the roof. And again since he doesn't have a light to indicate to people that he's vacant, I guess it's all good.

Oh and there is one other exception: a friend of mine is living in Northern California and took his cab up there with all the markings. He no longer leases the medallion, but owns the cab. Since it's on the other side of the country, I guess there's nothing wrong with keeping all the New York City taxi stuff- 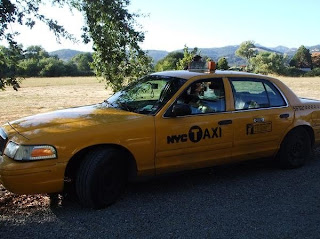 great masthead photo dude. where did you see that overturned taxi?

It was on Lexington Avenue and 35th street. Seen on shift shots here- http://www.nyctaxiphoto.com/2009/04/shift-shots-308.html

There's a former NYC taxi in the fleet parking lot of VIP/Allstate taxi service in Phoenix. I'll snap a photo for you when I get a chance.

I LIKE THE SIGHT OF A FULL FLEDGED NYC YELLOW CAB HANGING OUT UNDER THE SHADE OF A TREE IN CALIFORNIA, LIVING OUT IT'S RETIREMENT IN STYLE.